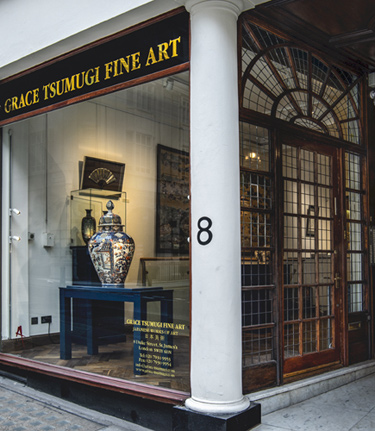 Grace Tsumugi Fine Art specializes in Japanese Antiques, particularly work of art from the late Edo period, the Meiji and Taisho eras, introducing lacquer, inro, metalwork, enamel, ceramics and also paintings, screens and textiles; including the works by the Imperial Court Artists. In addition, the gallery deals in works of art and craft from the 20th century to contemporary.

Tsumugi Shoji opened the gallery Grace Tsumugi Fine Art, at 8 Duke Street St. James’s, London in 2001. Whiles working for the leading Japanese Meiji art gallery in Mayfair as a specialist from 1989 to 2000, she was involved in researching private collections for their exhibitions and publications, including the John Young Collection: The Dragon King of the Sea, exhibited at the Ashmolean Museum, Oxford in 1991; the Nasser D. Khalili Collection: Japanese Imperial Craftsmen at the British Museum in 1994, followed by the collection of 8 volumes: The Nasser D. Khalili Collection of Japanese Art – Meiji no Takara – Treasures of Imperial Japan in 1995. Not only introducing the finest objects for collectors and museums throughout the world, we work with Ayako Shoji of our Tokyo office G. T. ART JAPAN researching the records kept in Japan.

Grace Tsumugi Fine Art participated in various events and art fairs: The International Asian Art Fair in New York between 2004 and 2007, INS (International Netsuke Society) Conventions between 2001 to 2007, TEFAF (The European Fine Art Fair) Maastricht between 2011 and 2014 and Asian Art in London from 2002 until 2020. We are a member of BADA (British Antique Dealers Association) to support and advice genuine collectors of Japanese art.

We will hold a special exhibition in our gallery each year.  Please go to ‘News & Exhibitions’ page for more information.

We look forward to welcoming you to our gallery.

Keep in touch with latest news and exhibitions

Find out more or adjust your settings.

This website uses cookies so that we can provide you with the best user experience possible. Cookie information is stored in your browser and performs functions such as recognising you when you return to our website and helping our team to understand which sections of the website you find most interesting and useful.

Strictly Necessary Cookie should be enabled at all times so that we can save your preferences for cookie settings.

If you disable this cookie, we will not be able to save your preferences. This means that every time you visit this website you will need to enable or disable cookies again.

This website uses Google Analytics to collect anonymous information such as the number of visitors to the site, and the most popular pages.

Please enable Strictly Necessary Cookies first so that we can save your preferences!